Fitness seems to be at the top of the list for the health-conscious populous of modern times. You’re either into casual running, walking or even cycling -- or maybe you take these things a little more seriously and do it for triathlons or nature trails. Regardless, there’s one accessory out there for you lot that just simply makes things a little easier.

They help outdoor enthusiasts track various statistics related to physical activity, like accurate pace, positioning, heart rate, calories burned and more. Each GPS watch manufacturer tries to differentiate themselves from the competition by adding special features, all made specifically to entice consumers into making their decision.

Sometimes, it’s a difficult choice. Hopefully this will help you out a little. Let’s find out what is the best GPS watch in 2016. Going out into the outdoors can be a daunting endeavor, not to mention it is also really easy to put yourself in a bad spot. But if you’re going to head out, then you can do a lot worse than the Garmin Epix. Track yourself on trails, landmarks, and even receive sunrise/sunset reports as well as storm warnings. It’s also extremely rough and rugged, able to withstand the elements in almost any weather condition. It features full color offline maps on a 1.4-inch high resolution touch screen, giving the watch the ability to triangulate your position virtually anywhere on the globe. All that is required is a healthy GPS signal and you’ll never get lost. And perhaps one of the most usable features of the Garmin Epix is the ability to allow other people to track you as well, if you’re worried about getting carried away with your wilderness exploration.

Garmin has long been a major player in the GPS watch business, and the company has a solid fan base that swears by its durability and top-notch quality. Consumers have praised the Garmin Epix for its extended functionality.

It’s listed at just a little over USD $500 on the Garmin products page, which isn’t a light price tag by any means but the features this wearable powerhouse packs makes it an absolutely worthy purchase. Made with the urban city walker in mind, the Fitbit Surge is a sleek and functional smartwatch with a modern design. It’s aim is to track pretty much every activity the regular joe goes through each and every day, from walking, to running, to climbing steps -- all while pushing real-time social media updates, call and SMS notifications, calendar reminders and the usual lot. You can use it to trek for miles into deep jungle -- the urban kind, and not the lush, green kind -- and it should give users exactly what they need, when they need it. The Surge also features built-in heart rate monitoring and sleep tracking and a battery that should last up to four days on a single charge with average use. It’s a pedestrian package that, while not heavily packed with features, certainly does its job quite well.

At around USD $200, the price point is definitely attractive for the value you can get with this wearable and is certainly cheaper than other more feature-packed options.

That being said, it’s considered by users to be the Fitbit “superwatch” being that it has the most functionality out of any Fitbit out there, although a little bulkier than any of the other designs.

For ease of use and simplicity altogether wrapped in a functional and stylish package, you can’t go wrong with the Fitbit Surge. TomTom isn’t exactly known for its GPS watches, but rather for its in-car navigational GPS systems. What this means however, is this top-of-the-line technology is just a blueprint away from being crammed into a tiny smartwatch -- and TomTom has delivered with the Spark. It has waterproofing for up to 40m or 130 feet and can track your steps, active minutes, distance and duration run/walked, calories burned and even sleep patterns -- all in one nifty device that fits comfortably on your wrist. With activity tracking for up to 3 weeks, and GPS tracking for 11 hours on a single charge, the TomTom Spark is a fitness watch that aims for Best in Class. Additional features include a built-in heart rate sensor, the ability to use headphones for voice coaching and 3GB of storage space to store music directly on the watch itself to make workouts extra enjoyable without the presence of a smartphone.

At just a little less than USD $200, the Spark is value for money and TomTom has created a product that should be everyone’s go-to wearable. Users love its ease of use and great battery life.

And because it’s affordable, it might be the only GPS watch you’ll ever need. Initially a company that placed sole focus on tracking your heartbeat, Polar has recently injected GPS functionality in their fitness wearables. The recent development makes the Polar V800 is easily the best looking sports and fitness watch Polar has ever made. Couple this with your run-of-the-mill smart notifications when paired with a smartphone using the Polar app, great battery life at up to a month in activity tracking mode and a streamlined design and you have yourself a great device.

It doesn’t come cheap though. At USD $350 it’s a little on the pricey side, but users have praised its durable Gorilla Glass and 24 hour activity tracking, as well as its recovery coaching. That sounds like a pretty solid package to me.

The Polar V800 is the best Polar GPS watch on offer yet, and is a great little life-changer if you can afford it. Thus we have come full circle and have returned to Garmin. Consumers looking for a rough and rugged multi-sport GPS watch with smartphone pairing and notifications need only one device to rule all other GPS watches -- the Garmin Fenix 3. With a 1.2-inch sunlight-visible high resolution display, the Fenix 3 is modern, sleek and elegant. It has waterproofing for up to a whopping 100 meters and an omnidirectional steel EXO antenna with GLONASS for fast GPS fixing. On a single charge, it can last up to 20 hours straight in GPS mode and more than a month and a half in basic watch mode. Offering the usual suspects of activity tracking and distance monitoring, the Fenix 3 just does everything better than the competition, and that’s exactly where it separates itself from everything else. It has the ability to track multiple outdoor activities like cycling, hiking, skiing, running, and of course walking. The HR version of the Fenix 3 offers an included built-in heart rate monitor but at a heftier price tag.

It retails for close to USD $500 which is definitely something to consider, but it could end up being the only GPS watch you’ll ever need.

The Garmin Fenix 3 rounds out this list as the best GPS watch in 2016. 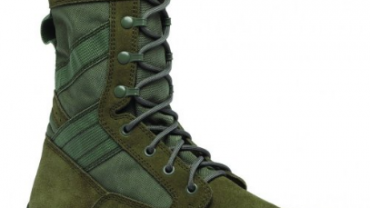