As anyone who has ever served can tell you, there is a lot of running in the Army. You run for fitness. You run for punishment. There might even be times when you’re literally running for your life.

So your choice of boot is important. While adherence to the new AR 670-1 rules and regulations is mandatory, you also want a boot that lets you move as fast as you can. I’ve tested and reviewed boots for years now, and I’ve also worn more than a few different types of boots in actual combat situations. So I try to approach my review based on both the technical specifications of the boot and their effectiveness in various real world conditions. With that in mind, here’s my Garmont T8 NFS boots

Key Features of the T8 NFS: • Well-Constructed - The boot is made from 250g nylon mesh, polyester webbing and 1.6mm suede leather. All stiches are doubled.

• Versatile – The boot grips and handles well in sand, mud, snow and rain. The spongy outsole even aids in climbing.

• Sleek – The small lug size and spacing means less debris is able to build up on the bottom of the boot.

• Comfortable – The boot fits snugly, but has a thick sole and excellent breathability. Your feet will remain comfortable in both hot and cold environments.

• Fast – So fast, this topic actually deserves a separate section…

NFS stands for “Need for Speed.” They are the fastest boot in the entire Garmont tactical line. What makes these boots so mobile?

• The outsole is minimized.

• The outsole wraps around less of the heel and toe than the other boots in the T8 line. The effect is pretty amazing. They felt more like running shoes than traditional boots. I was running at full speed through the forest near my house. The boots had plenty of grip and traction, and I always felt sure-footed even on muddy, slippery terrain.

There was a bit of a learning curve with the laces. Because the laces are connected to the tongue with the leather reinforcement, the tongue needs to be straight and smooth before you lace up. I learned this the hard way. A small crinkle in the tongue led to pain across the entire top of my foot. Fortunately, once I straightened the tongue, and re-laced the boot, I had no issues.

Overall, the boot fit well. The upper was snug. The outsole and ankle were supportive. The sizing was true (which is great considering I prefer to order online, where I obviously can’t try on the boot beforehand I buy).

The boots were well-ventilated and breathable. My toes had room to move, and the circulation in my feet never felt constrained. They were fast-drying, too. Obviously, the mobility provided by the boots is the main selling point. There are, by necessity, a few sacrifices which must be made in order to achieve this mobility.

First, the boot is lighter than most others. Let me be clear: This is a solid, well-constructed boot which is suitable for combat and other intense situations. However, this is not the absolute strongest boot on the market.

Also, the boot is not particularly well-insulated against harsh winter conditions. For situations involving the cold, you’ll probably be better off with the Garmont T8 Extreme. On the plus side, the NFS works well in hot environments, including the desert.

The small lugs aren’t amazing on slick, flat surfaces, such as a rainy sidewalk. To be honest, however, this is an area in which very few boots excel. I was hardly slipping and sliding, but the NFS still wouldn’t be my first choice for consistently wet, urban areas. They do dry quickly, however.

Are the Boots a Good Value?

The boots retail for about $140. On my website, I asked for personal experiences involving the boots, and received many helpful anecdotes. The general consensus was the boots lasted for at least a year under heavy use. With proper care, the boots should last for many years.

Garmont is a trusted name in military boots. Based in Italy, they’ve been making footwear for both sporting and tactical purposes for hundreds of years. I’ve never had a problem with their customer service. If the boot isn’t for you, you can return or replace it for any reason within one year of purchase.

Who is This Boot For?

They’re ideal for anyone who needs to move fast in a combat boot. They’re lightweight, which works well for long hikes as well as periods of standing.

Outside of the military, this boot offers a lot of advantages for law enforcement personnel. The NFS boots are certainly useful in a foot pursuit! Also, their lightweight mobility works well when driving a vehicle.

These boots are also a good choice for civilians. While I need some foot protection when hiking in the woods near my house, I also want comfort. I’m not carrying tons of gear when I go on a hike, so the NFS has more than enough support for my needs there, too.

IS THIS BOOT A GOOD BUY?

If I had to sum up my Garmont T8 NFS boots review with one word, it would be mobility. This is a boot which emphasizes speed over all else. Don’t get me wrong – you’ll still find plenty of support, durability and protection. They’re just slightly lessened when compared to other boots.

Let’s be real, though. If you need a boot with high mobility, you probably aren’t carrying extra heavy loads of gear or operating in the extreme cold anyway. At the end of the day, this is a bit of a specialized product. But that specialization is extremely well done. If you’ve got the need for speed, the Garmont T8 NFS is probably the best boot for you. 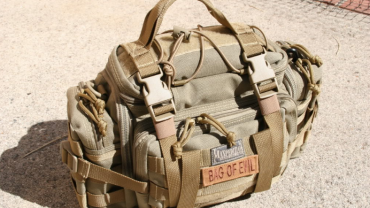